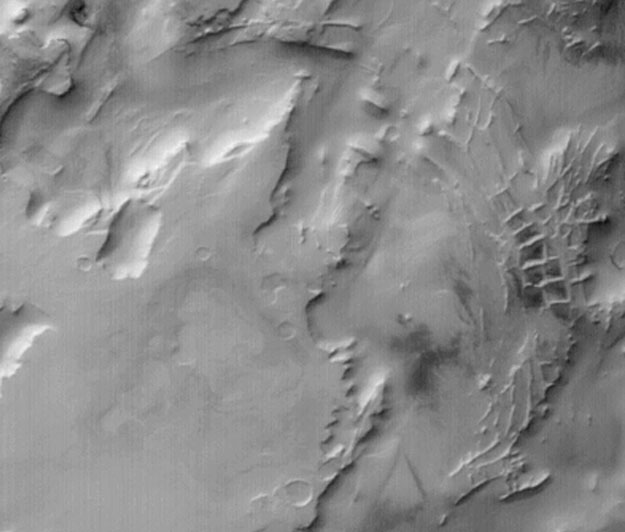 Explanation: What could cause rectangular ridges on Mars? As data flows in from the two spacecraft currently orbiting Mars, surface structures are seen that are not immediately understood. These structures pose puzzles that planetary geologists are eager to solve, as they might provide clues to past processes that have shaped Mars over billions of years. On the right of the above image is an unusual array of ridges first spotted in Mariner 9 data in 1972. A ridge wall runs for about 5 kilometers. Two competing progenitor theories include hardened sand dunes and once-molten rock that seeped through surface cracks and cooled. Dubbed "Inca City" for their resemblance to stone walls of an ancient Earth civilization, the new Mars Global Surveyor images now show them to be part of a larger circular pattern, indicating an origin possibly related to the impact crater. (Non-natural origin hypotheses are not invoked by conservative scientists unless clear indications exist that natural processes could not work.)