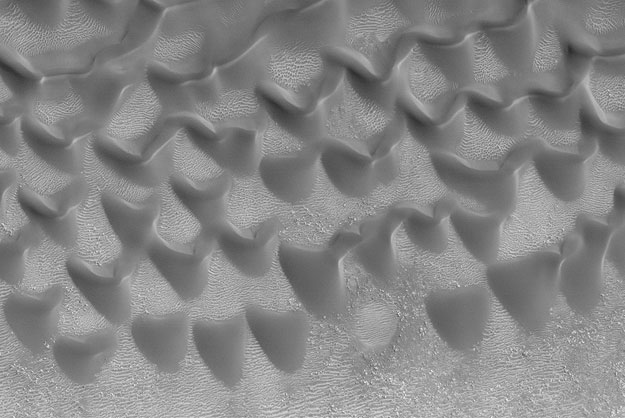 Explanation: Sand dunes on Mars can appear exotic. The dark dunes above might be compared to shark's teeth or chocolate confections. In reality, they arise from the complex relationship between the sandy surface and high winds on Mars. These particular dunes are located in Proctor Crater, a 170 kilometer wide crater first seen to house sand dunes by Mariner 9 more than 25 years ago. The above picture was taken by Mars Global Surveyor (MGS), a robot spacecraft currently in orbit around Mars. MGS has recently completed a primary goal of taking and transmitting detailed survey images of the red planet over an entire Martian year (669 Earth days). MGS will now be deployed to study particularly interesting regions of Mars in more detail.