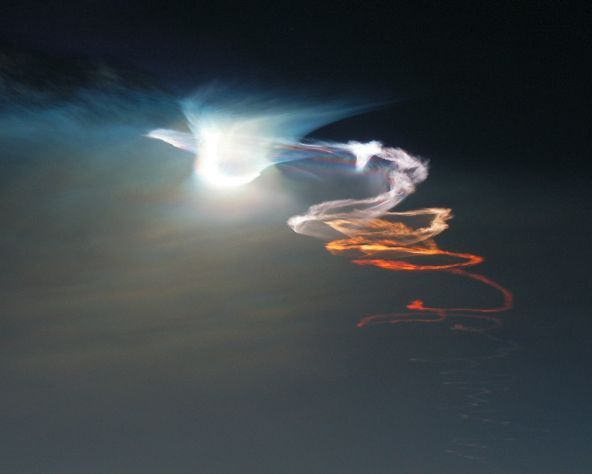 Explanation: Bright light from a setting Sun and pale glow from a rising Moon both contribute to this stunning picture of a rocket exhaust trail twisting and drifting in the evening sky. Looking west, the digital telephoto view was recorded from Table Mountain Observatory near Wrightwood California, USA on September 19, four days before the autumnal equinox. The rocket, a Minuteman III solid fuel missile, was far down range when the image was taken. Launched from Vandenberg Air Force Base it carried its test payload thousands of miles out over the Pacific Ocean. The red/orange color from the setting Sun dramatically intensifies near the top of the rocket trail, but below the sunset line, the very bottom of the trail is faintly illuminated from the east by a nearly full Moon. Still in full sunlight, the bright diffuse cloud at the top of the trail, the result of a rocket stage separation, is tinged with rainbows likely produced by high altitude ice crystals forming in the exhaust plume. Astronomer James Young comments that the cloud takes on the appearance of a white dove flying from right to left across the sky.