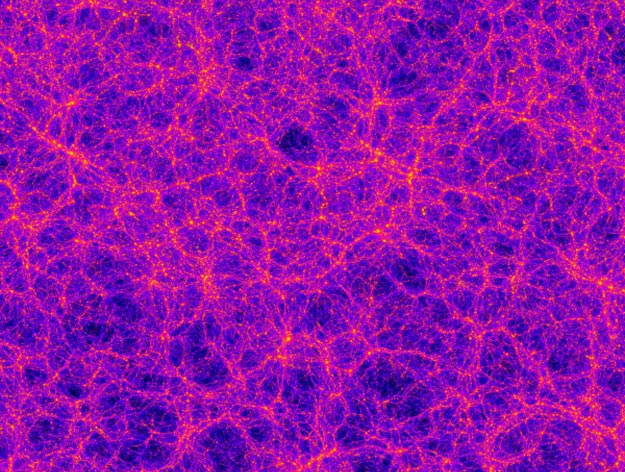 Explanation: Where is most of the normal matter in the Universe? Recent observations from the Chandra X-ray Observatory confirm that it is in hot gas filaments strewn throughout the universe. "Normal matter" refers to known elements and familiar fundamental particles. Previously, the amount of normal matter predicted by the physics of the early universe exceeded the normal matter in galaxies and clusters of galaxies, and so was observationally unaccounted for. The Chandra observations found evidence for the massive and hot intergalactic medium filaments by noting a slight dimming in distant quasar X-rays likely caused by hot gas absorption. The above image derives from a computer simulation showing an expected typical distribution of hot gas in a huge slice of the universe 2.7 billion light-years across and 0.3 billion light years thick. The distribution of much more abundant dark matter likely mimics the normal matter, although the composition of the dark matter remains mysterious. Both the distribution and the nature of the even more abundant dark energy also remain unknown.