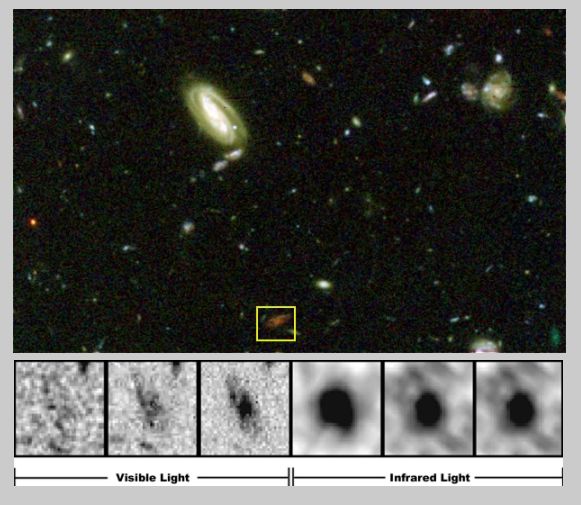 Explanation: Pick a galaxy, any galaxy. In the top panel you can choose from a myriad of distant galaxies revealed in a deep Hubble Space Telescope image of a narrow slice of the cosmos toward the constellation Hercules. If you picked the distorted reddish galaxy indicated by the yellow box, then you've chosen one a team of infrared astronomers has recently placed at a distance of 9 billion light-years. Classified as an ERO (Extremely Red Object), this galaxy is from a time when the Universe was only one third its present age. Along the bottom panel, this galaxy's appearance in filters ranging from visible to infrared wavelengths (left to right) is presented as a series of negative images. The brightness of the galaxy in the infrared compared to the visible suggests that light from intense star formation activity, reddened by dust clouds within the galaxy itself, is responsible for the extremely red color. Astronomers estimate that this galaxy has around 100 billion stars and may in fact be a very distant mirror -- an analog of our own Milky Way Galaxy in its formative years.