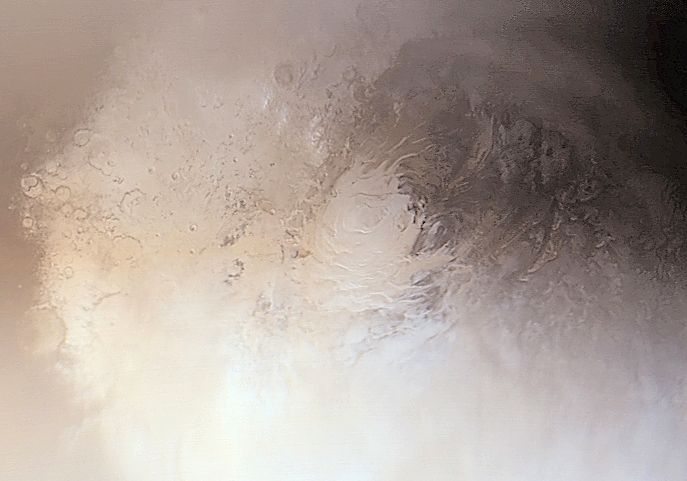 Explanation: The south pole of Mars is the bright area near the center of the detailed, subtly shaded color image above. Recorded in September of this year by the Mars Global Surveyor (MGS) spacecraft, the picture shows a region surrounding the 400 kilometer wide martian polar cap in the midst of southern hemisphere spring. During this season the ice cap, predominantly layers of frozen carbon dioxide (dry ice) plus some water ice, begins to shrink as the ices change directly from solid to gas (sublimate). Hazy clouds of ice crystals and fog, extend across the bottom of the picture and a darker, more defrosted area is visible at the upper right, near the Red Planet's night side. A wealth of MGS data has allowed changes in the extent and density of the ice cap to be tracked over time. Now, researchers are also reporting indications that, in addition to seasonal changes, overall the martian southern ice cap has been dwindling in recent years -- dramatic evidence of a changing martian climate. At the measured rate, the increasing amount of carbon dioxide released could gradually raise Mars' atmospheric pressure, doubling it over hundreds to thousands of martian years.