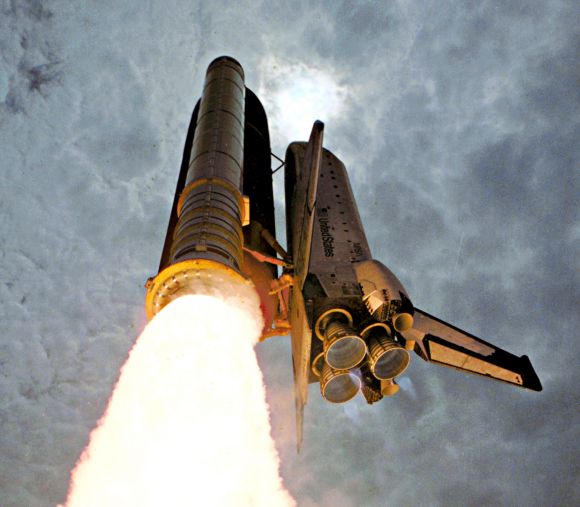 Explanation: Twenty years ago this week, the Space Shuttle Columbia became the first reusable spaceship. Its second trip to low Earth orbit and back again began on November 12, 1981, following its maiden voyage by only seven months. Seen above Columbia, 56 meters (184 feet) long with a 24 meter (78 foot) wingspan, is launched mated to an external fuel tank and two solid rocket boosters producing dramatic exhaust plumes. The solid rocket boosters, one on each side of the external tank, provide most of the thrust in the first 2 minutes after launch and are then jettisoned for later recovery. Supplying the main shuttle engines during liftoff, the external fuel tank separates after about 8 minutes. The largest shuttle element not recycled for a future flight, the external tank falls back toward Earth breaking up and descending into a remote ocean area. Still the oldest operating shuttle, Columbia is pictured here in June of 1992 rocketing toward a cloud bank on its twelfth flight. Officially designated OV-102, Columbia is fittingly named after the 18th century sailing vessel which became the first American ship to circumnavigate planet Earth.