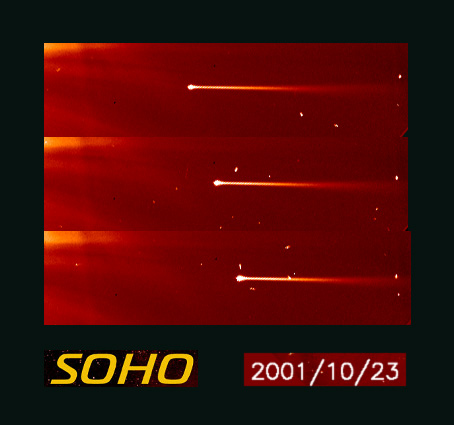 Explanation: The most prolific comet discovering instrument in history rides aboard the sun-staring SOHO spacecraft, 1.5 million kilometers sunward of planet Earth. Of course, most of these SOHO comets have been sungrazers - like the one illustrated in the dramatic montage above. Three frames taken hours apart on October 23rd, show bright SOHO comet number 367 plunging toward the fiery solar surface, its tail streaming away from the Sun located just beyond the left hand border. Each panel spans about one million kilometers at the distance of the Sun. From bottom to top, the comet's tail grows as the intensifying solar radiation heats the frozen comet material and increases the outflow of gas and dust. Because of their orbits, sungrazers are believed to belong to a family of comets produced by the breakup of a single much larger comet. Coincidentally, this sungrazer was discovered shortly after solar active regions blasted out clouds of energetic particles, like those that triggered the recent spectacular auroral storms. And like all SOHO sungrazers so far, comet number 367 was not seen to survive its close solar encounter.