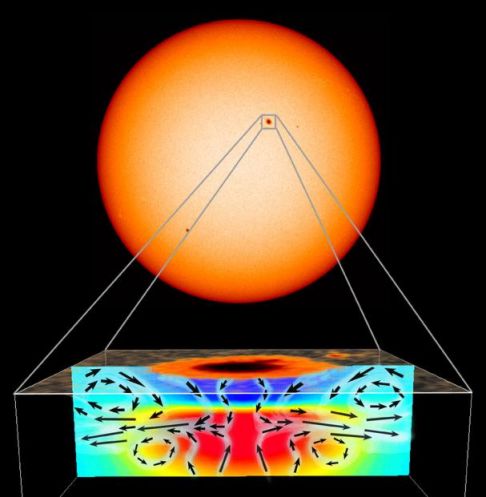 Explanation: At the Sun's surface, sunspots are known to be dark, planet-sized regions of intense magnetic fields. But what lies below? Using observations from the Michelson Doppler Imager (MDI) instrument aboard the space-based SOHO observatory, astronomers have derived this premier picture of the flow of material just beneath a visible sunspot. The MDI data indicate that immediately under the sunspot a strong inflowing current exists, shown above by the dark arrows. This converging undertow pulls near-surface material toward the spot and prevents the concentrated magnetic fields from flying apart, like repelling poles of iron magnets. Such a configuration appears to divert the normal flow of plasma bubbling up from the solar interior, creating a self-sustaining sunspot. The MDI instrument can explore the properties of the solar interior by detecting motions produced by sound waves as they interact at the solar surface.