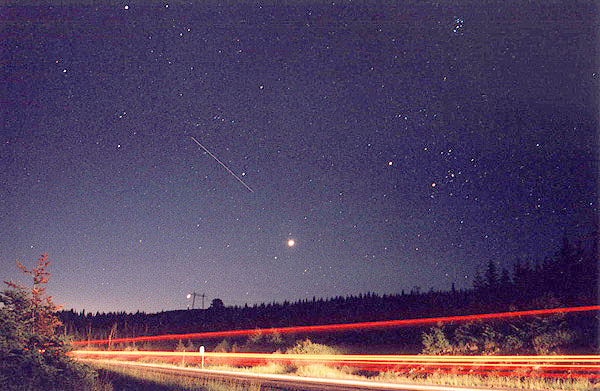 Explanation: Those up before dawn in late July in the northern hemisphere could see planets, stars, and a spacecraft in a single quick glance before starting their day. Near the eastern horizon was bright Jupiter, and not far above and to its right was the very bright Venus. Connecting the dots will point you just right of Saturn. Far in the distance but near the top right of the frame is the Pleiades star cluster. Orbiting the Earth well in the foreground, the International Space Station reflected sunlight to cause the faint line segment. In the very close foreground, the bright red and yellow lines were caused by a passing van. The above picture was taken on July 26 from Quebec, Canada. Why are bushes visible through the van? The van was present for only a few of the 25 seconds of the total exposure.