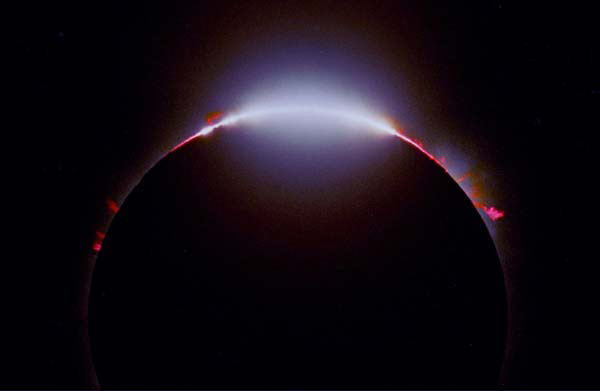 Explanation: When the Moon's shadow reached out and touched Earth's southern hemisphere on 2001 June 21, the first total solar eclipse of the 21st century began. Starting in the Atlantic, the dark, central lunar shadow or umbra traced a path which crossed southern Africa and the large island of Madagascar before ending at sunset in the Indian Ocean. Of course, as the lunar disk blocked the Sun the total phase offered splendid views of the elusive outer solar corona. But, as seen in this stunning telescopic view from southern Madagascar, it also revealed an active solar limb bristling with pinkish, planet-sized prominences. Taken as totality began, this image of the last bright rays of sunlight shining through dips and valleys in irregular lunar terrain gives the illusion of a glittering jewel set in a pink celestial ring.