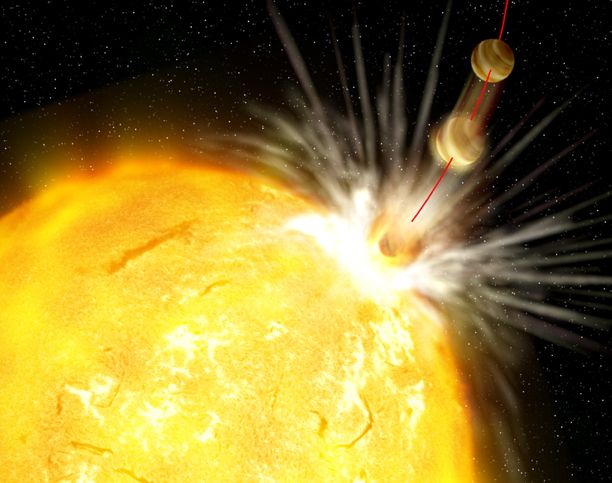 Explanation: Stars like HD 82943 are main sequence G dwarf stars with temperatures and compositions similar to the Sun. Also like the Sun, HD 82943 is known to have at least two giant planets, but unlike gas giants in our solar system their orbits are not nearly circular and bring them closer to the parent star. Astronomers now point to strong observational evidence that HD 82943 used to have more planets ... but swallowed them in the past. Such a cosmic cataclysm is illustrated above in an artist's dramatic vision. As a result, planetary debris would contaminate the outer layers of HD 82943. Researchers using a high resolution spectrograph at the European Southern Observatory's Kueyen telescope believe they have seen a clear signature of this contamination by identifying the isotope Lithium-6 in this sun-like star's spectrum. Because the light element Lithium-6 is so readily destroyed in nuclear reactions during star formation, no significant Lithium-6 should now exist in HD 82943. Startlingly, perhaps the most likely explanation for the presence of Lithium-6 today is that it is left over from planetary material which formed separately and was then absorbed by the parent star.