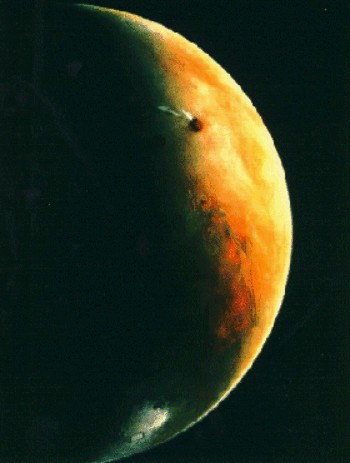 Explanation: "Yes, I have been to Barsoom again ..." begins John Carter in Edgar Rice Burroughs' 1913 science fiction classic "The Gods of Mars". In Burroughs' novels describing Carter's adventures on Mars, "Barsoom" is the local inhabitants' name for the Red Planet. Long after Burroughs' stories were published, Mars continues to inspire Earthdwellers' interests and imagination. Soon it will again be invaded by spacecraft from Earth. This dramatic picture of a crescent Mars was taken by NASA's Viking 2 spacecraft as it approached Barsoom in 1976.