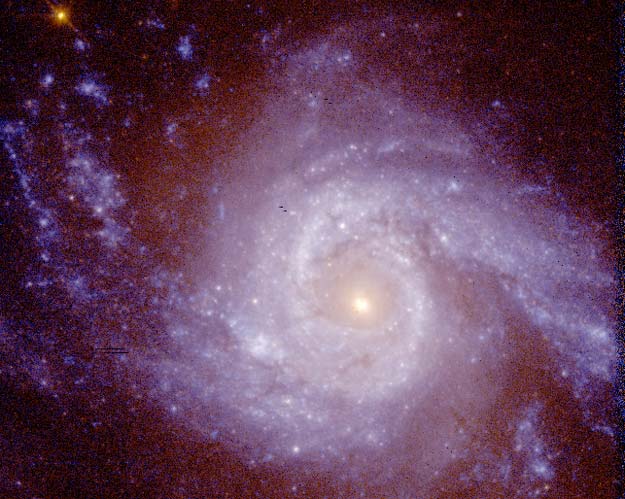 Explanation: Why is NGC 3310 bursting with young stars? The brightest of these new stars are so hot that they light up this spiral galaxy not only in blue light, but in light so blue humans can't see it: ultraviolet. The Hubble Space Telescope took the above photograph in different bands of ultraviolet light. Speculation holds that NGC 3310 collided with one of its own dwarf companion galaxies only about 50 million years previously. This merger sent density waves rippling around the spiral disk, causing many gas clouds to condense into star forming regions. Imaging nearby galaxies in ultraviolet light allows astronomers to better understand the images of distant highly redshifted galaxies in visible light, and so to understand why many of these distant galaxies appear relatively fragmented. The unusually smooth NGC 3310 spans over 20 thousand light years and lies about 50 million light years away towards the constellation of Ursa Major.