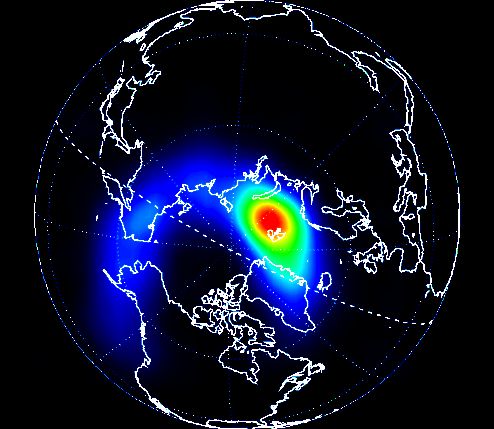 Explanation: Above is a picture of the Earth in x-rays, taken in March of 1996 from the orbiting Polar satellite. Most of the planet is dark with superposed continent and coordinate grids, while the bright x-ray emission near the north pole is shown in red. Why does the Earth have an x-ray glow? Actually, the Earth itself does not, but the aurora high in the Earth's atmosphere do glow with x-rays detectable by space-based instruments. Gusts of energetic ions from the Sun can distort the Earth's magnetosphere allowing high energy electrons spiraling along magnetic field lines to slam into the upper atmosphere above the magnetic poles. This activity causes shimmering visible aurora along with x-ray, ultraviolet, and radio emission. The x-rays are not dangerous to life on Earth because they are absorbed by the dense, lower atmosphere.