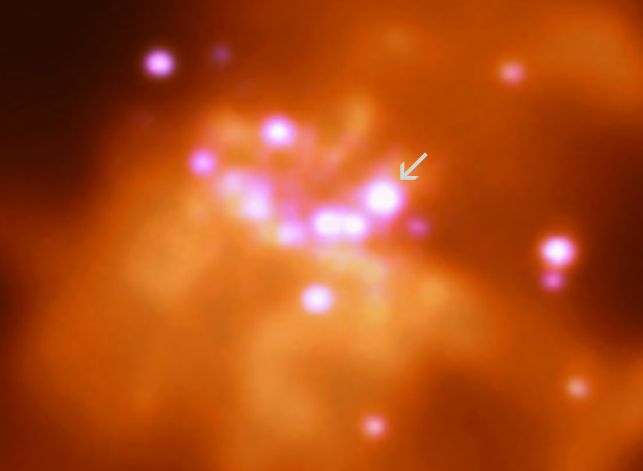 Explanation: Black holes are probably the most bizarre creatures in the modern astronomical zoo. And after years of pondering black holes as either stellar mass objects seen in binary star systems or enormous supermassive black holes at the centers of galaxies, astronomers now have strong evidence for another exotic species -- middle mass black holes. The leading candidate for the ultradense middle ground is indicated in this false-color detail of a sharp x-ray picture from the space-based Chandra Observatory. A close-up of x-ray sources near the center of starburst galaxy M82, the cropped Chandra image spans about 4,000 light-years. M82 itself is around 11 million light-years distant. The arrowed source has recently been convincingly demonstrated to exhibit x-ray characteristics of an object whose gravitational field holds more than 500 times the mass of the sun within a volume the size of the moon! Astronomers also note that unlike the supermassive variety which are thought to lie at the centers of galaxies, this middle mass black hole is about 600 light-years from the center of M82. Theories for the formation of a middle mass black hole include the collapse of a "hyperstar" formed by the coalescence of many normal stars, or the direct merger of stellar mass black holes.