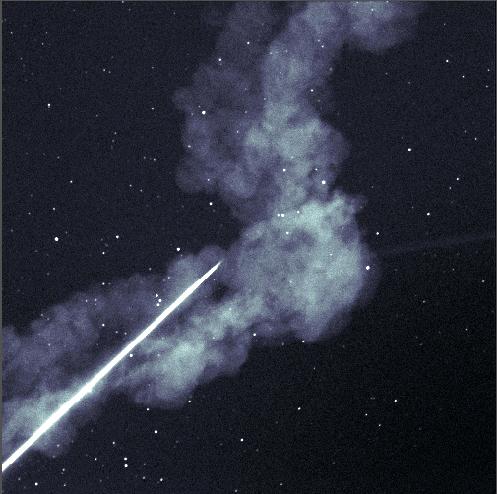 Explanation: Recent Leonid meteor showers have been rich in bright fireball meteors which leave lingering trails stretching across the night sky. These trails, or persistent trains, are mysteriously self-luminescent and do not shine by reflected light. Visible for many minutes, they are blown by winds at altitudes up to 100 kilometers and can take on progressively twisted worm-like shapes. Recorded in November, during the 1998 Leonid meteor shower, this picture shows a persistent train dubbed "Glowworm" by astronomers at Kirtland Air Force Base's Starfire Optical Range (SOR). What makes the Glowworm glow? To find out, SOR astronomers engaged in a unique experiment, tracking and probing both 1998 and 1999 Leonid meteor trains with pulsed laser lidar (light detection and ranging) systems and other instruments. A copper vapor laser produced the intense streak seen shooting from the lower left of the image. While the cause of the Glowworm's glow remains enigmatic for now, the SOR results will help unravel the mystery.