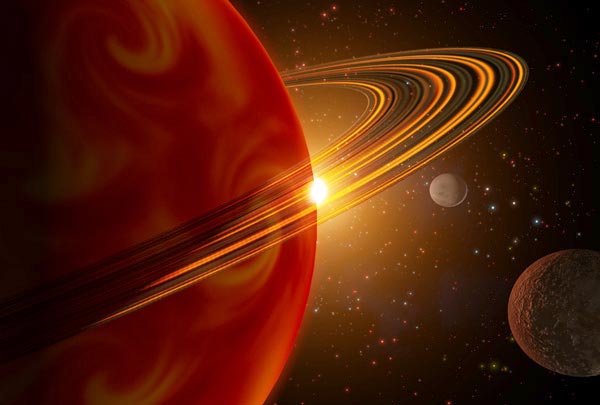 Explanation: The last decade saw the profound discovery of many worlds beyond our solar system, but none analogs of our home planet Earth. Exploiting precise observational techniques, astronomers inferred the presence of well over two dozen extrasolar planets, most nearly as massive as gas giant Jupiter or more, in close orbits around sun-like stars. Less massive planets must certainly exist, and yesterday preeminent planet-finders announced the further detection of two more new worlds -- each a potentially smaller, saturn-sized planet. The parent suns are 79 Ceti (constellation Cetus), at a distance of 117 light-years, and HD46375 (constellation Monoceros), 109 light-years away. With at least 70 percent the mass of Saturn, 79 Ceti's planet orbits on average 32.5 million miles from the star compared to 93 million miles for the Earth-Sun distance. This arresting artist's vision depicts the newly discovered world with rings and moons, known characteristics of giant planets in our solar system. HD46375's planet is at least 80 percent Saturn's mass, orbiting only 3.8 million miles from its parent star. While Saturn's mass is only one third of Jupiter's, it is still about 100 times that of Earth, and dramatic discoveries in the search for smaller planets are still to come.