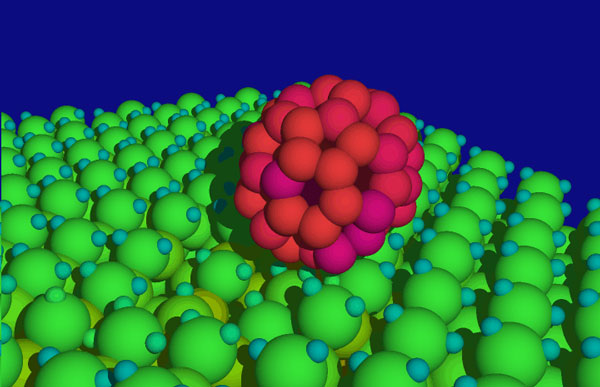 Explanation: Scientists have found, unexpectedly, tiny time capsules from billions of years in the past. The discovery involves small molecules that can apparently become trapped during the formation of large enclosed molecules known as fullerenes, or buckyballs. Luann Becker (U. Hawaii) and collaborators recently found fullerenes in an ancient meteorite that fell to Earth about 30 years ago. Extra-terrestrial fullerenes inside the meteorite survived, and upon inspection, were not empty inside. The small molecules trapped inside are giving a glimpse of what the Solar System was like during its formation. Pictured above is a computer simulation showing a relatively small fullerene (60-atoms of carbon) situated above a hydrogenated silicon surface. How these fullerenes formed, how they survived, where else they can be found, and what else might be found inside these tiny time capsules is developing into an exciting area of research.