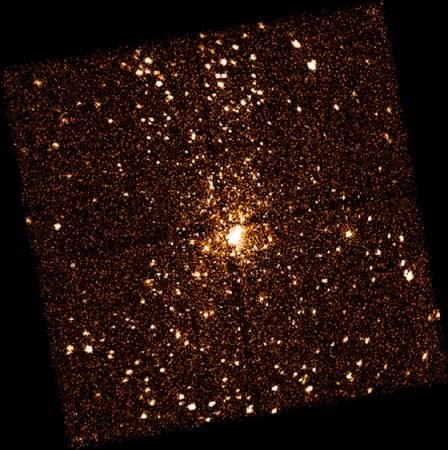 Explanation: The stars of Orion shine brightly in northern winter skies where the constellation harbors the closest large stellar nursery, the Great Nebula of Orion, a mere 1500 light-years away. In fact, the apparently bright clump of stars near the center of this Chandra X-ray telescope picture of a portion of the nebula are the massive stars of the Trapezium - the young star cluster which powers much of the nebula's visible-light glow. But the sheer number of other stars seen in this X-ray image, which spans about 10 light-years, has surprised and delighted astronomers and this picture was recently touted as the richest field of X-ray sources ever recorded in a single observation. The picture does dramatically illustrate that young stars are prodigious sources of X-rays, thought to be produced in hot stellar coronas and surface flares in a young star's strong magnetic field. Our middle-aged Sun itself was probably thousands of times brighter in X-rays when, like the Trapezium stars, it was only a few million years old. The dark lines through the image are instrumental artifacts.