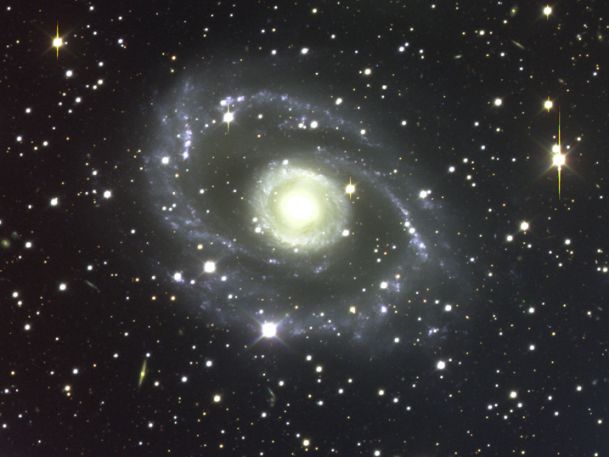 Explanation: Centaurus, the Centaur, is one of the most striking constellations in the southern sky. The lovely Milky Way flows through this large constellation whose celestial wonders also include the closest star to the sun, Alpha Centauri, the largest globular star cluster in our galaxy, Omega Centauri, and the closest active galaxy, Centaurus A. Embraced by tightly wound spiral arms of bright blue star clusters, this gorgeous galaxy - cataloged as ESO 269-57 - also falls within Centaurus' borders. Seen behind a veil of foreground stars which lie within our own galaxy, this face-on spiral galaxy is about 150 million light-years away and 200,000 light-years across. The brighter foreground stars are marked by diffraction spikes caused by the telescope and yellow vertical stripes due to saturated digital camera pixels in the above Very Large Telescope image from the European Southern Observatory. Tantalizing wisps of more distant, faint galaxies are visible in the background.