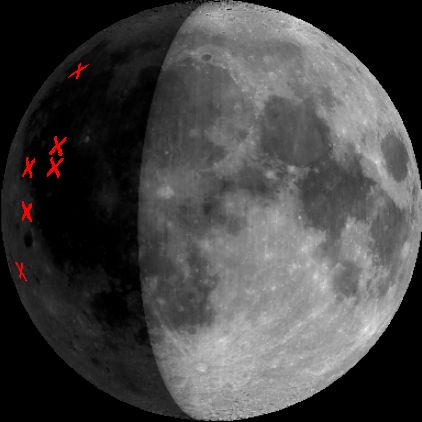 Explanation: Craters produced by ancient impacts on the airless Moon have long been a familiar sight. But now observers have seen elusive optical flashes on the lunar surface - likely the fleeting result of impacting meteoroids. Orchestrated by David Dunham, president of the International Occultation Timing Association (IOTA), video recordings made with modest equipment and visual telescopic observations have, for the first time, detected and confirmed a total of six flashes on the Moon's dark side. The flashes, some initially as bright as a third magnitude star, were all seen within hours of the peak of this year's Leonid meteor shower. Their locations are indicated by the red Xs on this projection of the Moon as it appeared on the night of November 18. Similar flashes would have been difficult to see if viewed against the Moon's brightly lit portion. It has been estimated that the brightest flashes were made by meteoroids weighing around a tenth of a kilogram, resulting in lunar craters about one meter across. And ... the next chance to observe lunar impact flashes is coming up! Enterprising astronomers interested in long distance lunar prospecting should be monitoring the dark side of a nearly first quarter Moon during the Geminids meteor shower which will peak around December 13.