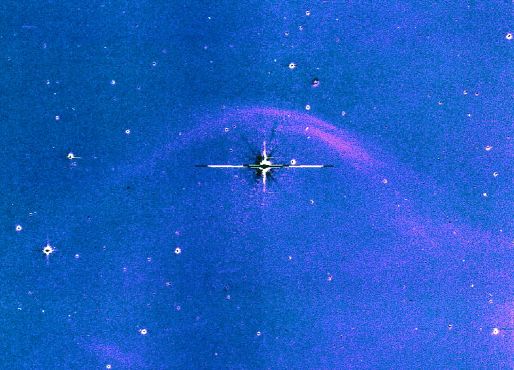 Explanation: Runaway stars are massive stars traveling rapidly through interstellar space. Like a ship plowing through the interstellar medium, runaway star HD 77581 has produced this graceful arcing bow wave or "bow shock" - compressing the gaseous material in its path. Located near the centre of this European Southern Observatory photograph, HD 77581 itself is so bright that it saturates the sensitive camera and produces the spiky cross shape. This star is over 6,000 light-years away in the constellation Vela, and appears to move at over 50 miles per second. What force could set this star in motion? A clue to the answer may lie in its optically invisible companion star, an X-ray bright pulsar known as Vela X-1. This pulsar is clearly the remnant of a supernova explosion ... which seems to have given this massive star and its companion a mighty kick!