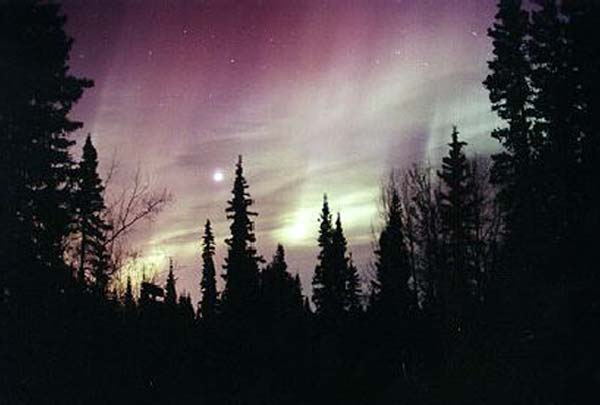 Explanation: A night sky can glow in fascinating ways. Through a clearing in the woods, the pictured sky above Alaska shines by reflected light from a nearby city, by the brightness of the Moon, and by aurora. The night sky in or near a city appears to contain relatively few stars because lights there reflect off atmospheric particles, hiding stars in a diffuse glow. The bright Moon also creates a diffuse sky glow, although much less bright than the analogous blue-sky glow created during the day by the Sun. Particles from the Sun crashing into the Earth's atmosphere are seen here as bands of aurora. These glows also illuminate visible clouds. Auroral displays are becoming more frequent as the Sun approaches Solar Maximum.