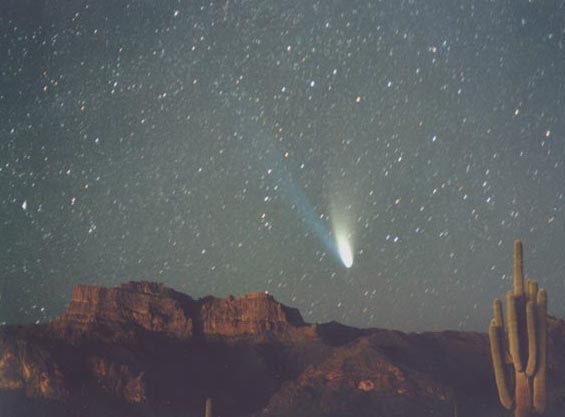 Explanation: Four years ago, Comet Hale-Bopp was discovered out near Jupiter falling toward the inner Solar System. Two years ago, it provided spectacular pictures as it neared its closest approach to the Sun. Still today, spectacular pictures of the brightest comet of the 1990s are surfacing. Above, Comet Hale-Bopp was photographed in 1997 behind the Superstition Mountains in Arizona. Clearly visible are the comets white dust tail that shines by reflected sunlight, and the blue ion tail that shines by glowing gas. Currently, there are several comets visible from the proper location with a small telescope. A comet visible to the unaided eye appears about once every five years.