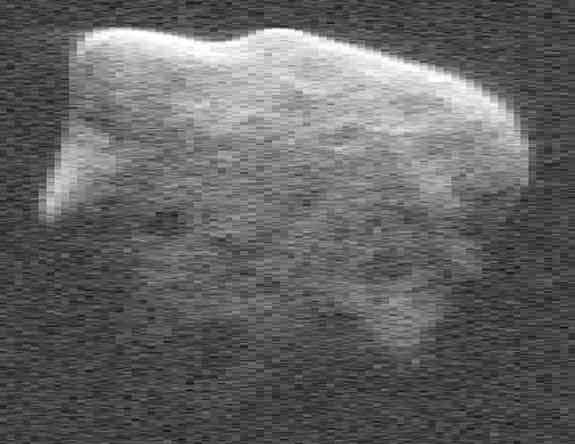 Explanation: Nearly four kilometers across, the huge rock known as 1999 JM8 silently passed only 8.5 million kilometers from the Earth in early August. The small asteroid was completely unknown before May. Every few centuries, a rock like this impacts the Earth, with the potential to disrupt modern civilization. Radar from two of the largest radio telescopes, Arecibo and Goldstone, tracked and imaged the Apollo asteroid as it approached to only 22 times the distance to the Moon. Although 1999 JM8 missed the Earth, thousands of similar but unknown asteroids likely exist that cross Earth's orbit. In fact, four asteroids have passed inside the orbit of the Moon within the last decade. Possibly of larger concern to humanity are the more numerous rocks near 100 meters across. Were one of these to strike an ocean, a dangerous tidal wave might occur.