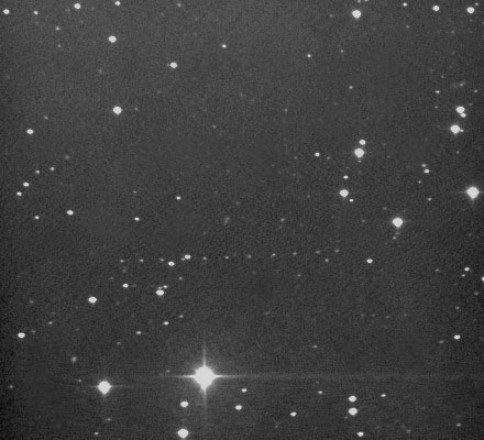 Explanation: Connect the dots and you'll trace the path of the Cassini spacecraft as it took a final turn by Earth on its way to the outer solar system. The dots (in a horizontal row just below center) are actually successive images of the spacecraft. The picture was produced by making exposures at 10 minute intervals as Cassini moved rapidly through Earth's night sky on August 18 - around the time of its closest approach. Cassini's ultimate destination is Saturn, but so far its voyage has consisted of a series of fuel saving "gravity assist" flybys of Venus and Earth, each designed to result in an increase in the spacecraft's speed. During this Earth flyby Cassini received about a 12,000 mile- per-hour (5.5 km/sec) boost. Cassini is now being maneuvered toward yet another slingshot encounter, this time a December 2000 flyby of of gas giant Jupiter, to received a final boost toward Saturn. The wayfaring spacecraft is slated to arrive at long last in the Saturnian system in 2004.