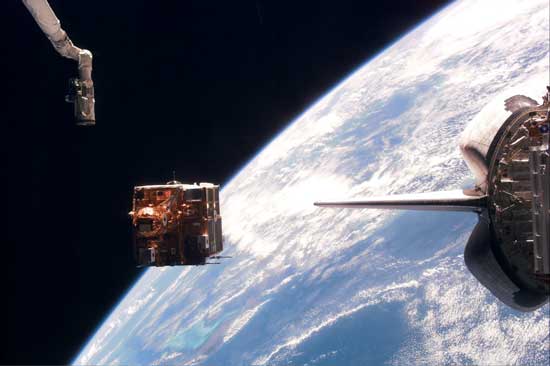 Explanation: Last October the Space Shuttle Discovery deployed Spartan 201, a spacecraft that monitored the corona of the Sun. Instruments on Spartan 201 were used to estimate the density of electrons emitted into the solar corona, calibrate data from the Solar and Heliospheric Observatory (SOHO) satellite, and study how the Sun is changing as it reaches maximum activity over the next few years. Pictured above, the space shuttle's robot arm (top left) releases Spartan (center) into space. The tail fin of the space shuttle is visible on the right, while the Earth hovers in the background. Spartan floated near the shuttle for two days before it was picked up again and returned to Earth.