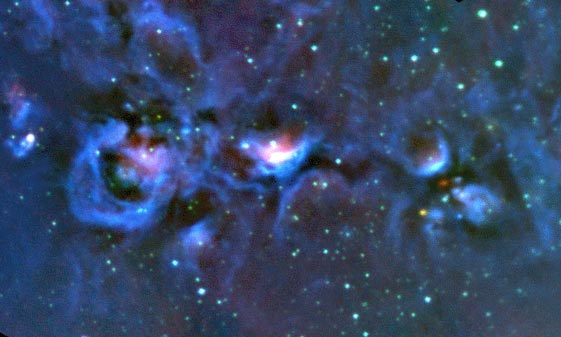 Explanation: NGC 6334 is a cloud of gas and dust that appears to be forming massive stars. At 5500 light-years away, the Bear Claw Nebula, as it has also been dubbed, is more than three times as distant as the Orion Nebula, but still close enough for detailed study. The Bear Claw Nebula can be found towards the constellation of Scorpius. In visible light, ionized gas makes NGC 6334 look quite red. The above false-color photograph, however, was taken in infrared light. There, the glow of starlight absorbing dust is more apparent (depicted in blue). Current research indicates that the bright sources are very young and massive stars. These stars emit light so energetic and intense that it destroys fine grains of dust in their immediate vicinity, creating an abundance of ionized gas (depicted in red).