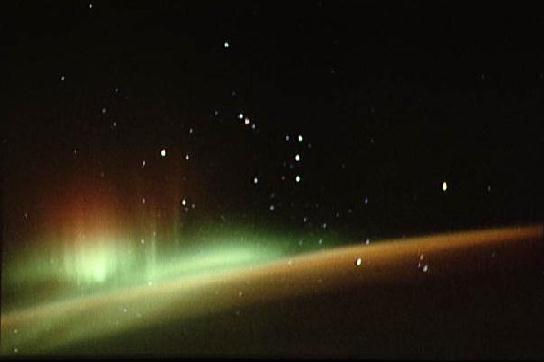 Explanation: Looking toward the south from low Earth orbit, the crew of the Space Shuttle Endeavor made this stunning time exposure of the Aurora Australis or southern lights in April of 1994. Aurora are visible at high northern latitudes as well, with the northern lights known as Aurora Borealis. They are caused by high energy electrons from the Solar Wind which are funneled into the atmosphere near the poles by the Earth's magnetic field. The reddish colors occur at the highest altitudes (about 200 miles) where the air is least dense. At lower altitudes and greater densities green tends to dominate ranging to a pinkish glow at the lowest. The familiar constellation of Orion the Hunter is clearly visible above the dark horizon in the background. Because of the shuttle's orbital motion, the bright stars in Orion appear slightly elongated.