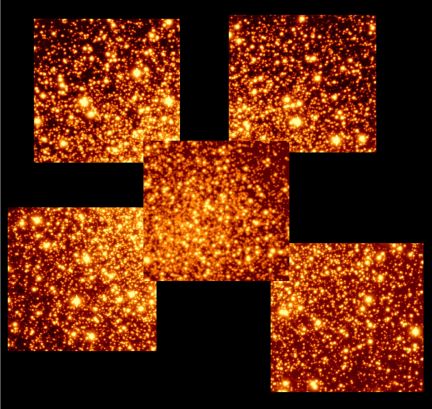 Explanation: Following orbits which loop high above the galactic plane, globular star clusters are probably 12 to 14 billion years old - truly ancient denizens of our Milky Way Galaxy. After analyzing these new ESO/VLT images of portions of the globular cluster NGC 6712, astronomers report that this dense grouping of about 1 million stars seems to be slowly dissolving - steadily loosing fainter, lower mass stars into our Galaxy's halo. Their results offer strong evidence for gravitational stripping of stars from clusters which pass through the plane and central regions of the Galaxy. One of about 150 globular clusters known to be members of the Milky Way, NGC 6712 is thought to have crossed through the crowded galactic plane only a few million years ago. NGC 6712 is about 23,000 light-years away in the southern constellation Scutum.