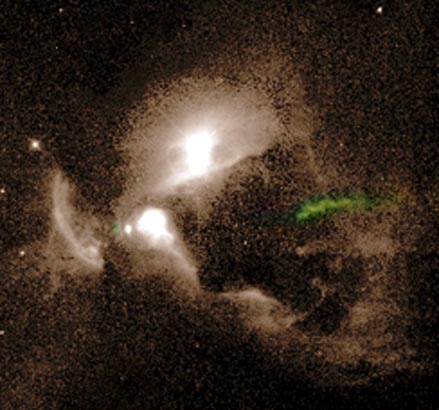 Explanation: Planets condense from disks. Several new Hubble Space Telescope pictures of stars surrounded by disks were released earlier this week. Since the glare of the central star usually makes a surrounding disk hard to see, prior observations in radio and infrared light were used to isolate systems where the disk was edge-on, blocking much of the central starlight. One such disk system, Haro 6-5B, is shown above in false color. Here, the central disk confines the emitted light into an hourglass shape. Complex dust clouds appear dark. A powerful protruding jet is shown in green. This budding planetary system measures 0.2 light-years across. Quite possibly, our own Solar System looked like this about 5 billion years ago.