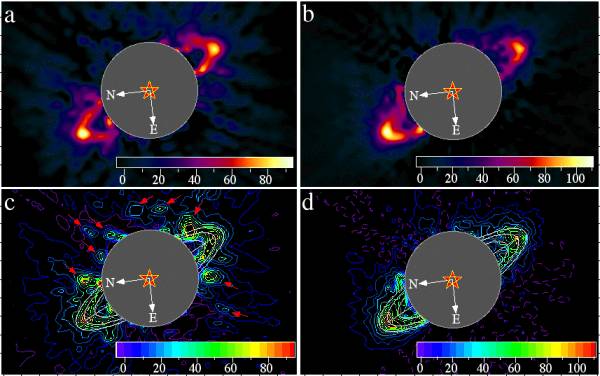 Explanation: These are not false-color renderings of the latest observations of Saturn's magnificent rings. Instead, the panels show a strikingly similar system on a much larger scale - a ring around the young, Vega-like star, HR 4796A, located about 200 light-years from Earth. Probably composed of dusty debris ground from colliding planetesimals, this ring is confined to a zone less than 17 AU wide (1 AU equals the Earth-Sun distance) and girdles the star at a radius of about 70 AU, roughly twice the orbital radius of Neptune. In analogy with the relationship of Saturn's rings and moons, this circumstellar ring could be held in place by forces due to planets - shepherding planetary bodies or the gravitational influence of larger planets orbiting closer to the parent star. In any event, because the ring would not survive long without something to keep it there, astronomers consider its presence strong evidence for unseen planetary bodies around HR 4796A. The top panels show the false-color images at two infrared wavelengths from the Hubble Space Telescope's NICMOS instrument, and the bottom panels trace the corresponding image contours. At the center of each, the overwhelming light of HR 4796A has been masked to reveal the fainter circumstellar ring.