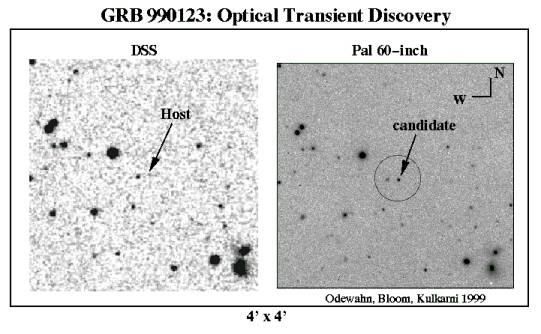 Explanation: Gamma-ray bursts rule the high-energy sky and Saturday another brief, intense flash of gamma-rays from the cosmos triggered space-based detectors. The orbiting Compton Observatory's BATSE instrument quickly relayed the burst's approximate location to fast-slewing, ground-based cameras primed to search for an elusive optical flash. The result -- the GCN coordinated ROTSE-I telephoto array recorded a breakthrough detection only 22 seconds after the burst trigger. Larger telescopes too captured the burster's optical counterpart and at right is an image identifying the candidate from the 60 inch Palomar reflector. At left is a prior sky survey image of the region which astonishingly shows a discernible smudge near the same position, likely the burster's host galaxy. The galaxy and bright burst suggest that this is the closest yet localized gamma-ray burst! Still, believed to be the most powerful explosions in the Universe, the source of the incredible energy of gamma-ray bursts remains a mystery.

Update: Reported redshift measurements now suggest that the burst is instead a very distant one. The galaxy in the survey image may not be the gamma-ray burst host but a foreground galaxy which by chance lies along the line of sight from Earth to the burster.