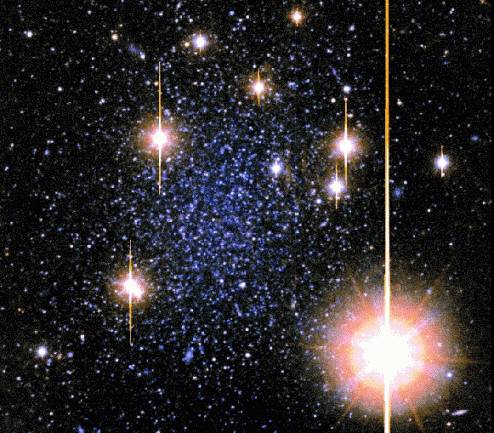 Explanation: The Pegasus dwarf spheroidal galaxy (Peg dSph) is a small, newly recognized member of the Local Group of Galaxies. Likely a satellite companion of the Local Group's dominant player, the large spiral Andromeda (M31), the Pegasus dwarf galaxy is almost hidden in the glare of relatively bright foreground stars in our own Milkyway. Still, this dramatic Keck telescope 3-color image reveals Peg dSph as a clump of fainter, bluer stars 2,000 or so light-years across. Excitement over discoveries of Peg dSph and other nearby dwarf galaxies reflects the fact that little galaxies may loom large in the process of galaxy evolution. They are thought to be the building blocks from which larger galaxies are constructed.