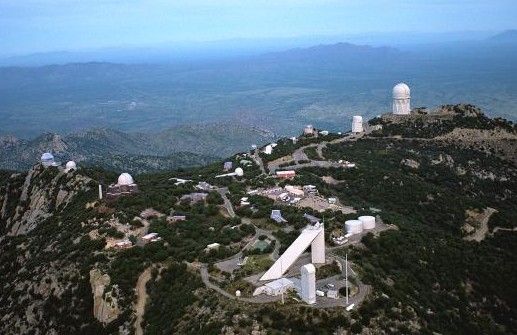 Explanation: At the top of Kitt Peak Mountain near Tucson, Arizona lies one of the world's great collections of telescopes. As pictured, in the dome at the far left lies the 3.5-meter WIYN Telescope, famous recently for tracking distant supernovae. The next major dome to the right houses a 36-inch telescope now used mostly for imaging. Farther to the right beside a thin tower is a 2.1-meter Telescope used currently for imaging and spectroscopy. The unusual triangular building houses the McMath-Pierce Solar Telescope. In front of it lies the Vacuum Tower Telescope while in back are the Burrell-Schmidt Telescope and the SARA 0.9-meter automated telescope. At the far right lies one of the world's largest telescopes: the 4-meter Mayall Reflector. Kitt Peak recently celebrated its 40th year during which it helped establish the existence of dark matter and the first gravitational lens. Kitt Peak National Observatory is part of the United States' National Optical Astronomical Observatories and is operated under agreement with the National Science Foundation.