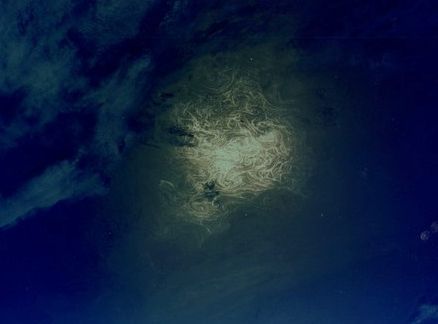 Explanation: Can you identify this wispy stellar nebula? How many light-years from Earth did you say? Resembling a twisting cloud of gas and dust between the stars this swirling form is actually close by - a spiral eddy formed near the North Atlantic Gulf Stream off the East coast of the U. S. Tens of miles across, spiral eddies are an ocean current phenomenon discovered by observations from manned spacecraft. Imaged by the Challenger space shuttle crew during the STS 41G mission this eddie is dramatically visible due to the low sun angle and strong reflection of sunlight. The reflection is caused by a very thin biologically produced oily film on the surface of the swirling water. Prior to STS 41G these eddies were thought to be rare but are now understood to be a significant dynamic feature of ocean currents. However, no good explanation of their origin or persistence exists.