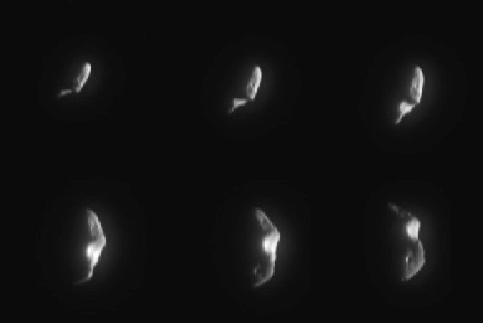 Explanation: On December 23, the NEAR spacecraft flew by asteroid 433 Eros. NEAR was originally scheduled to brake and orbit Eros, but an unexpected shutdown of its main engine caused this plan to be aborted. NEAR will now be reset and attempt to return to orbit Eros in early 2000. The above image sequence was taken as NEAR approached Eros. The rotation of the asteroid is visible in the successive frames. When NEAR is fully operational, it will likely provoke the world's largest telescopes to point not toward asteroid Eros but to positions indicated by another of NEAR's instruments: its gamma-ray burst (GRB) detector. NEAR's distant GRB detector happens now to be in a unique position to contribute information crucial to the rapid acquisition of accurate GRB positions.