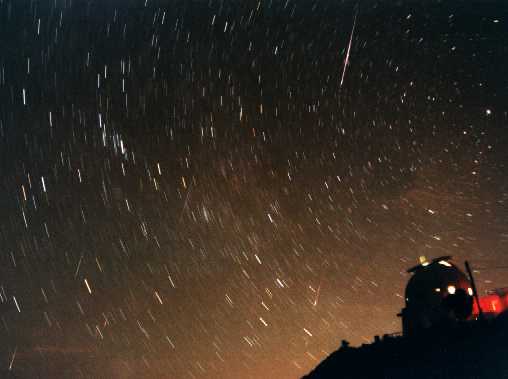 Explanation: More Leonids were visible at some places than others. In Israel, early in the morning of 17 November, it rained meteors though a clear sky. Observers there reported a peak rate for the 1998 Leonid Meteor Shower of about 600 meteors per hour. Visible in the above picture are no fewer than seven Leonid meteors occurring over just a few minutes. (Can you find them all?) The dome of the Wise Observatory is visible on the right. The Earth's rotation causes stars to appear as arcs. The 1998 Leonids might be remembered not for their numbers, however, but for the unusually high fraction of bright fireballs. Another eventful Leonid Meteor Shower is forecast for the same time next year.