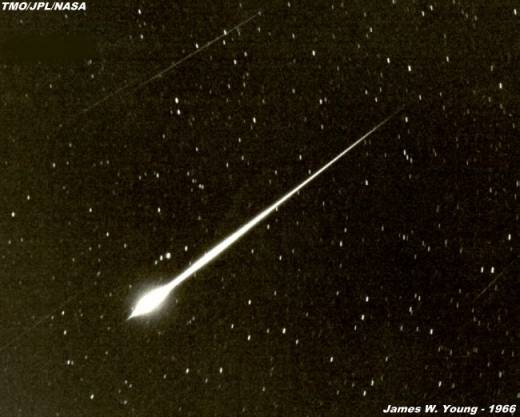 Explanation: This bright fireball meteor was photographed from Table Mountain Observatory during the peak of the annual Leonid meteor shower on November 17, 1966. That was a good year for Leonid meteor watchers - a meteor "storm" was produced as the Earth swept through a dense swarm of dusty debris from the tail of comet Tempel-Tuttle. Observer Jim Young reported a peak rate for the 1966 shower of about 50 meteors per second and recorded 22 otherwise extremely rare, bright fireballs like this one in the span of 90 minutes from his California mountain top location. Predictions are uncertain, but this year might also produce an intense apparition of the Leonids shower which should again peak on the 17th. You may need to be well placed and a little lucky to see the shower at its maximum, but Leonid meteors should be easy to see in dark skies - particularly in early morning hours - for two or so days before and after the peak. How do you watch a meteor shower? Get a comfortable lawn chair and a warm jacket ... go outside and look up!