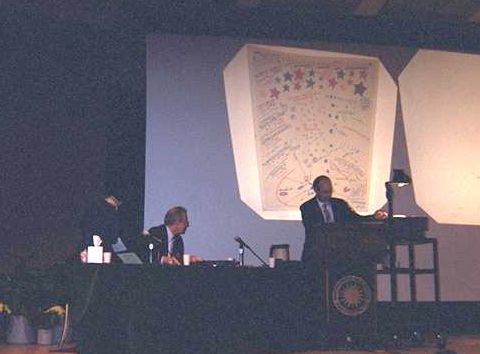 Explanation: At the Nature of the Universe Debate held last month at the Smithsonian, top cosmologists P. James E. Peebles (Princeton) and Michael S. Turner (Chicago) argued over whether new data is finally resolving the type of universe in which we live. Turner, pictured speaking above, argued that a universe that underwent an early, rapid, inflationary expansion now looks particularly strong, potentially explaining even new data that indicates some sort of dark energy. Peebles, watching, was more cautious, agreeing that the evidence for a big bang is strong, but arguing that the specific type is still unclear. Peebles noted that a big bang leaving little but low-density matter still could not be ruled out. Both Turner and Peebles agreed that this is an exciting time, as data should continue to pour in and curious astrophysicists scramble to decode the geometry of the universe. Margaret J. Geller (Harvard Smithsonian), the debate moderator, looks on. The event was sponsored by the Smithsonian, the National Science Foundation, NASA, Michigan Technological University, and USRA. It was held in the honor of David N. Schramm.