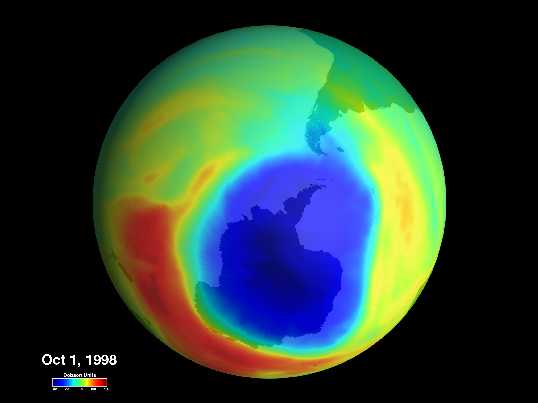 Explanation: It's back, and it's bigger than ever. The ozone hole that has been a cause of concern in recent years has again reformed over Earth's South Pole. The seasonal recurrence of the ozone hole was expected, although the size of the hole has never been so large this early in the season. Ozone is important because it shields us from damaging ultraviolet sunlight. Ozone is vulnerable, though, to CFCs and halons being released into the atmosphere. The ozone hole's large size is probably related to unusually low temperatures, allowing CFC byproducts like chlorine to react with atmospheric ozone molecules with greater efficiency. In the above false-color picture taken earlier this month, low ozone levels are shown in blue.