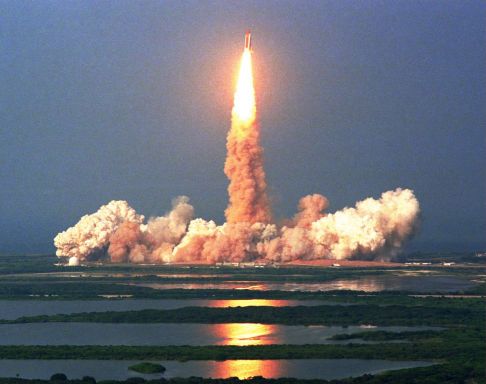 Explanation: Happy Birthday, NASA! The National Aeronautics and Space Administration officially began operations on October 1, 1958, absorbing its forerunner organization the National Advisory Committee for Aeronautics, NACA. Its landmark achievements in human spaceflight include the Mercury and Gemini Projects culminating in the Apollo Project moon landings in the 1960s and early 1970s, Apollo-Soyuz and Skylab in the 1970s, and the Space Shuttle program of the 1980s and 1990s. (Pictured is the June 1998 launch of the Space Shuttle Discovery.) NASA's science programs have produced the robotic exploration of our Solar System, views of the Universe across the electromagnetic spectrum, and valuable meteorological and remote-sensing Earth observations. At birth, NASA's priorities were largely driven by the pressures and competitions of the Cold War. But looking back over 40 years, the sum of its accomplishments have produced needed new technologies and a vital new perspective on Planet Earth and the Cosmos.