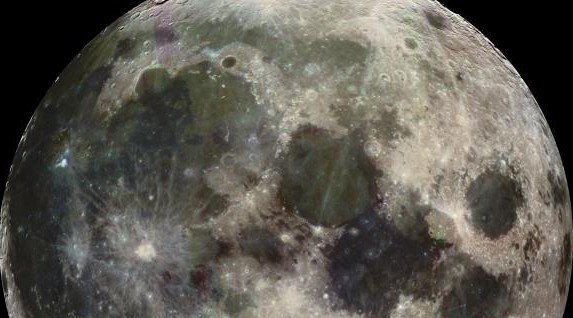 Explanation: Launched on January 6th, NASA's Lunar Prospector spacecraft has been exploring the Moon with instruments designed to sense global properties while orbiting pole-to-pole, 63 miles above the lunar surface. Now over half way through its primary mission, impressive science results include a much-needed precision gravity map of the lunar surface, global maps of elemental composition, the detection of mini-magnetospheres related to large impact sites, and evidence pointing toward a small iron-rich lunar core. But perhaps the most spectacular recent announcement has underscored Prospector's earlier block-buster - the detection of substantial water-ice at both the North and South lunar poles. An analysis of data collected so far is consistent with near-pure water ice deposits - the residue of cometary impacts - buried beneath as much as 18 inches of dry dusty regolith. And the estimates now suggest 10 times more water in each polar region than previously thought! The small Prospector spacecraft carries no cameras for lunar imaging, but the Moon is relatively well photographed. This detailed, color-enhanced nearside mosaic was produced from images taken by the Galileo spacecraft as it passed the Moon in December of 1992.