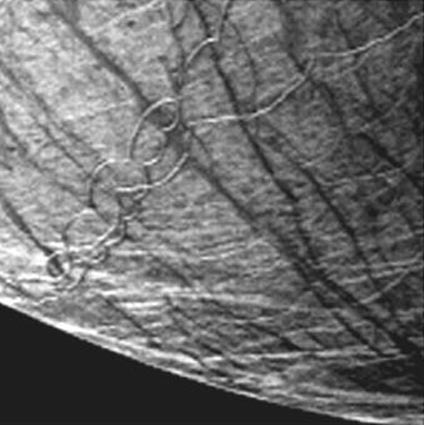 Explanation: Europa's icy crust has many unusual features. Pictured above is part of Europa's southern hemisphere photographed by the Galileo spacecraft currently orbiting Jupiter. Europa is one of the largest moons of Jupiter, and is thought to have oceans of water underneath its ice-covered surface. Among many cracks and ridges appear dark cusp-shaped features running from the lower left toward the upper right. The origin of these features is not known for sure, but their shape is thought to indicate that large portions of Europa's crust move together, similar to tectonic motion of our Earth's crust.