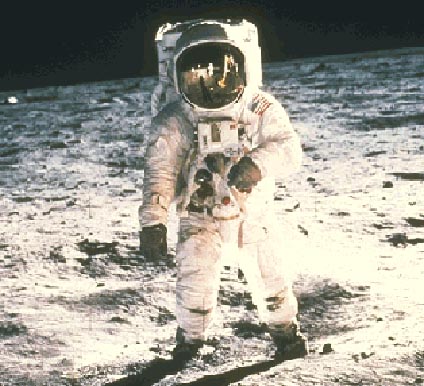 Explanation: Humans once walked on the Moon. Pictured above is the second person to stand on the lunar surface: Edwin "Buzz" Aldrin. During this Apollo 11 mission, Neil Armstrong (the first person to walk on the moon) and Buzz Aldrin landed on the Moon while Michael Collins circled in the Command Module above. The lunar team erected a plaque on the surface that reads: HERE MEN FROM THE PLANET EARTH FIRST SET FOOT UPON THE MOON JULY 1969 A.D. WE CAME IN PEACE FOR ALL MANKIND. The Apollo missions demonstrated that it is possible to land humans on the Moon and return them safely.