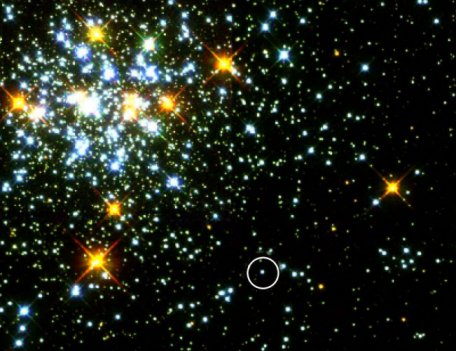 Explanation: This is NGC 1818, a youthful, glittering cluster of 20,000 stars residing in the Large Magellanic Cloud, 164,000 light-years away. Pick a star. Any star. Astronomers might pick the unassuming bluish-white one (circled) which appears to be a hot newly formed white dwarf star. What makes it so interesting? The standard astronomical wisdom suggests that stars over 5 times as massive as the sun rapidly exhaust their nuclear fuel and end their lives in a spectacular supernova explosion. With less than this critical mass they evolve into red giants, pass through a relatively peaceful planetary nebula phase, and calmly fade away as white dwarf stars like this one. Except that as a member of the NGC 1818 cluster, this new white dwarf would have evolved from a red giant star over 7.6 times as massive as the sun - which should have exploded! Its discovery will likely force astronomers to revise the limiting mass estimate for supernovae upward.