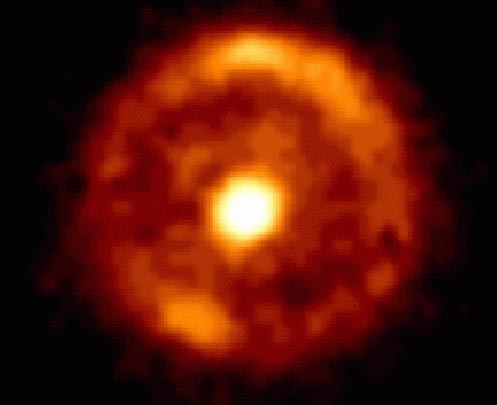 Explanation: Can one galaxy hide behind another? Not in the case of B1938+666. Here the foreground galaxy acts like a huge gravitational lens, pulling the light from the background object around it, keeping it visible. Here the alignment is so precise that the distant galaxy is distorted into a nearly perfect giant ring around the foreground galaxy, a formation known as an Einstein ring. The bright peak at the center of the bulls-eye is the nearer galaxy. The cosmic mirage was found initially with the MERLIN radio telescope array. The follow-up image shown above from the Hubble Space Telescope was released earlier today. Although appearing extremely small at 1 arcsecond diameter, the above Einstein ring is really tens of thousands of light years across.