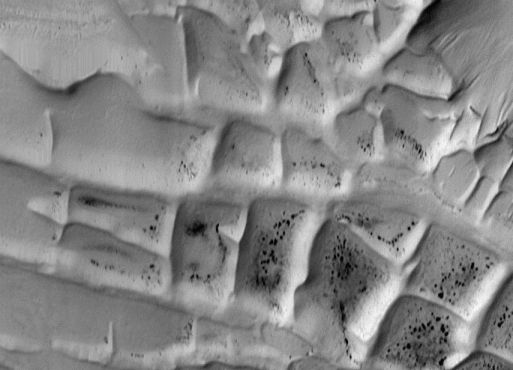 Explanation: No, it's not breakfast ... but looking down from an orbiting spacecraft, the odd intersecting ridges covering this area of Mars do present a waffle-like appearance. The cause of the ridge pattern is unknown but it suggests that more complex layered deposits lie below. The south polar region in this Mars Global Surveyor image measures about 8.5 by 12 miles and is spread with a layer of bright, seasonal carbon dioxide frost. Mysterious dark spots which pepper some of the interridge areas are 60 to 300 feet across. Their exact nature is also unknown, but these spots have apparently defrosted early and lack the bright layer of frozen carbon dioxide.