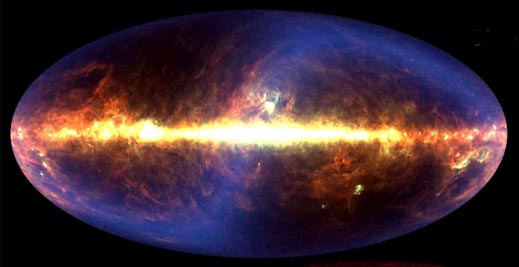 Explanation: Three major sources contribute to the far-infrared sky: our Solar System, our Galaxy, and our Universe. The above image, in representative colors, is a projection of the entire infrared sky created from years of observations by the robot spacecraft COBE. Our Solar System is evidenced most prominently by the S-shaped blue sash called zodiacal light, created by small pieces of rock and dust orbiting between the Sun and Jupiter. Our Galaxy is evidenced by the bright band of light that crossed the middle of the image, created mostly by dust that laces the disk of our Milky Way. Close inspection of the image reveals that the background is not completely dark, indicating that our Universe itself provides a diffuse glow, created by the dust left over from the star formation throughout the Universe.